Located on the Southern point of Inhaca Island, and sometimes mistakenly named as Santa Maria (which is actually the name of the village located on the inner bay side of Machangulo Peninsula), Ponta Torres is an excursion that MUST NOT be missed!

The boat ride takes you along the western shores of Inhaca and around Ponta Penduine where your experienced skipper will follow the winding channel past sleepy fishermen villages and mangrove swamps where flocks of Flamingos gather and Pelicans ply their trade close to the sandy tidal shores.

Be sure to be on the lookout for Whimbrils, Giant Egrets, a variety of Kingfishers, including the rare Mangrove Kingfisher, Yellow billed Kites, Herons, Storks, Crowned Hornbills and the occasional Fish Eagle!

Ponta Torres is a protected Marine coral reef and Reserve, which affords some quite incredible snorkelling opportunities on the incoming tide when the clearer waters are being pushed in – do not miss the huge schools of Bigeye Kingfish and Natal Moonies amongst the proliferation of reef fish and colours that are on show – this is truly a veritable paradise!

You can walk the stunning, deserted beaches along the coral rock formation until you reach the edge of the Island with Machangulo Peninsula and the mainland in front of you, separated only by a few hundred meters by an area notoriously known as Hells Gate, due to its rough and tricky exit to the Indian Ocean.

Please be advised that there is a charge of 200.00mtn per person for snorkelling at the Ponta Torres Reserve, payable to the Marine Park Guards on duty.

Please ensure that you do not touch any coral, rocks or marine life in any manner or form – no shells or other such souvenirs may be taken from any Reserve Area on Inhaca Island. Take only your photographs and leave only with your memories! 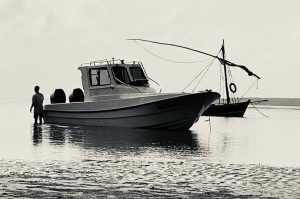 During the months of July through to the end of November, migrating Humpback Whales and the occasional Southern Right Whale frequent the shores of Inhaca to mate, give birth and nurture their offspring before making their long and arduous journey back to the Antarctic to feed.

Up to 30 to 40 Humpback Whales a day have been spotted on occasion around Inhaca Island and there are no words that can describe the humility you feel being in their presence. Humpback whales are an endangered species. In the past, the global humpback whale population size was about 750,000 to 2 million animals whereas the current global population is estimated to be about 30 to 40 thousand.

Having migrated south from rich northern waters provisioned with tons of blubber, the Humpbacks do not feed for the duration of their tropical visit. Instead they devote all of their energy to birthing and nursing a new generation of young, or in courting and mating to create the next.

The topside observer is treated to a full array of individual and group surface behaviours including a variety of thrilling breaches, pectoral fin slapping, spy hopping, peduncle throws and lob tailing. It is possible to be able to witness all these behaviours in a day’s excursion!

Where Dolphins are family-based and highly social, Whales are anti-social. If you see two 40-foot-long grown whales together, usually one is a female and the other a male. If you see three, it’s usually two beaux vying for her attention, and this can be particularly noticeable during the early months of the mating season when their testosterone levels are high and they are eager to find a mate. The presence of a receptive female can lead to competitive rowdy groups as challenging males physically struggle to displace her escort.

When a whale dives, air is compressed in its lungs. Upon reaching the surface, the air is exhaled through the whale’s blowholes. The exhaled air expands, causing the temperature to decrease, thereby condensing into water vapour. The blow is quite visible and can reach heights of 20 feet. In concert with the blow is the sound of rushing air that can be heard up to 800 feet away. The blow of a humpback whale is unique to each animal and a great way to distinguish between types of whales.

On average, adult humpback whales take a breath every ten to fifteen minutes, but can remain submerged for as long as forty-five minutes. Calves must rise to the surface every three to five minutes to breathe. The trip can take up to 3 hours and sighting of Whales is not guaranteed. Please look out for Bottlenose and Spinner Dolphins who are frequently spotted around these northern waters of the Island.

“No living animals have captured our imaginations as have the great whales… They fire our imaginations and stab at our emotions. They inspire our art, literature, and music. And so they should. The indescribable blend of grace, power, and beauty of a whale as it glides underwater, leaps toward the sky, or simply lifts its flukes and slides into the sea symbolizes a vanishing poetry of the wild.”

Dr. James Darling, With the Whales

Mamas Lodge has 2 sea kayaks available for usage at your leisure, single and double skull and we highly recommend an early morning paddle on the serene, clear, turquoise waters as the sun slowly rises over the Island from the east.

Alternately you can paddle your way along the shoreline south to visit the Museum at the Biology Station or paddle north where you will pass the local airport and then drift amongst the spectacular mangrove swamps with their exceptionally crystal clear waters – whichever way, make sure you pack some refreshments, hat and sun lotion!

Water skiing can be enjoyed directly in front of the Lodge where conditions are normally ideal – skis are readily available at the Lodge for your convenience. Inhaca is a fantastic venue for the kite surf enthusiast – don`t miss out on the opportunity and bring your gear along with you! (Our Lodge currently does not supply kite surfing equipment) 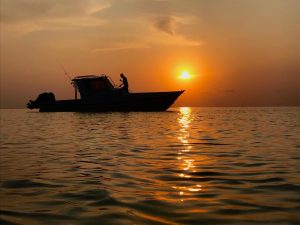 When the incoming tide is high enough, the boat will take you between Inhaca and Portuguese Island to a deserted part of beach close to the northern tip of the Island – from here, for those who are adventurous to try, a +/- 3km return walk across the sands and through tropical forest areas will take you to the Inhaca Lighthouse (Farol) where the light keeper will allow you, for a small donation, to climb to the top of the tower and marvel at the truly breathtaking expanse and beauty of both Inhaca Island and the Great Indian Ocean.

A guide will accompany you along this trip and we strongly recommend the usage of footwear due to the extreme heat of the summer sand! We must advise that this is a tough climb with steep inclines, but one that is more than worth the effort! This is an excursion that must not be missed, a truly awe inspiring expedition!! For those looking for a more relaxed, less strenuous excursion, a walk along the beach will bring you close to the northern tip of Inhaca Island where you would be able to glimpse the last visible part of the old lighthouse shipwreck, the M/S Tecumseh that went down in November 1932, and enjoy the many rock pools that abound in this area when the tide is out – here you will find an abundance of juvenile fish, crabs, cleaner shrimps and even moray eels – large, enticing rock pools also call you in to relax and unwind……… 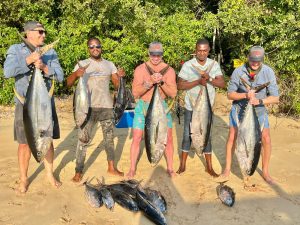 Fishing opportunities abound around Inhaca Island for every type of enthusiast with a number of world class spots to choose from. Enjoy either a full or half day charter with a limited amount of fishing tackle available on request. Whether you prefer to trawl, jig, spin, or fly fish, some of the most exciting game fishing may be found around Inhaca – Various species of Kingfish including the elusive Giant Kingfish (Caranx Ignobilis), Barracuda, Dorado, Sierra, Queenfish, Wahoo, Job, Yellow fin tuna and Sailfish amongst others, not forgetting of course the magnificent Black, Striped and/or Blue Marlin. Inhaca has also, for many years, been a favourite destination for fly fishing for that ever elusive Bone Fish.

Deep sea fishing charters can be organised through prior arrangement (Please be aware that any fishing requires a permit to be paid to the marine Services own the Island. Ask our managers to assist you.) On the incoming tide, a short boat ride south will take you to Barreira Vermelha, more commonly known as Coral Gardens, where you can jump into the warm, shallow waters of the Indian Ocean and enjoy some incredible snorkelling opportunities where coral growth, due to the shallowness and protection of the waters in this area, continues to thrive – marvel at the size of the Plate and Brain Corals and spot the juvenile damsels and Chocolate Dips hiding in between Stag Corals. You may even see the occasional Loggerheads Turtle! 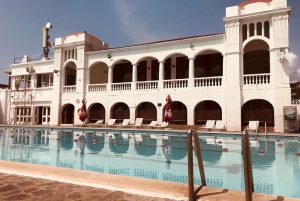 Take a leisurely walk along the stunning western shores of Inhaca to the museum at the Biology Station (about two hour walk return) – a large variety of well preserved and pickled marine life as well as a complete skeleton of the highly endangered Dugong amongst a whole array of other interesting items make this journey one well worth taking.

The Museum is run by the University of Eduardo Mondlane in Maputo and there is also a Research Station attached to the Museum (Kindly note that there is a small fee of approximately $1.00 to pay for adults entering the museum and we highly recommend that you take along enough water with you as there is no shop or facilities at the destination.